How to make your own backstrap loom for a few dollars

A little background. A backstrap loom is a weaving loom where the tension on the warp threads is maintained by a strap that goes around your waist, while the other end of the warp threads are fixed to a stationary point... a tree, doorknob, table leg, or other sturdy item. The shed (the space between the up and down threads that you weave between) is formed by a rigid heddle device made up of slots and holes... warp threads move freely through the slots, but are moved up and down when in the holes. You manipulate them by moving this heddle up or down, depending on which row you are on.

So I give you: The $2 backstrap loom

What you'll need: One piece of inkjet printable shrink film
(one brand name is ShrinkyDink, but there are others), sharp pointed scissors or exacto knife, scrap yarn or stout cord for the strap, an unsharpened pencil or dowel about the size of a pencil, a single-hole paper punch (standard size) and my schematic image (shown below) 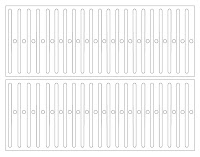 Following the directions on your shrink film packaging, print the above picture on an 8.5x11 sheet, using the entire sheet of shrink film for the one image (check your printer settings carefully, use print preview, and if possible print on paper first to make sure it will come out correctly). Cut the two large rectangular pieces apart... this will create two heddles. 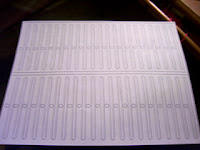 Believe me, it is easier to mess one up than you think! The main rectangle shape does bleed over, but this is normal. 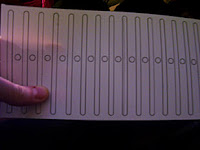 Cut out the oval slots first while leaving the main rectangle whole... this is why pointed scissors were essential. Poke through carefully! This is when I put a tear in mine that eventually became the snapping point. 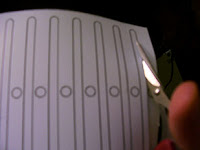 Once the oval slots are cut out, it will be easier to get to the holes with a paper punch... but be careful, as the film can still tear. MAKE SURE you leave solid parts on either side of the punched hole! If you get too close to the edge, when it shrinks that part will break, and the hole will not work properly. I know it's a tight fit, but center it as best you can. 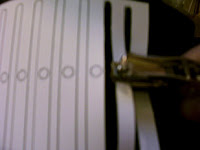 Once you have all slots cut out and holes punched (don't worry too much about neatness, the next step will smooth out a lot of rough edges) it's time to shrink! Follow the directions on the package, but pay attention to any tips they give for even shrinkage. My brand recommended lower temps for a longer time. However, every brand I've seen still only takes a few minutes even at the lowest settings. (I placed mine on a sheet pan lined with a scrap of tinfoil for baking)

Remove item from the oven when done BUT DO NOT TOUCH IT until completely cool. My first one I skewed the slots into snake-like shapes by picking it up too soon. Let it cool completely. 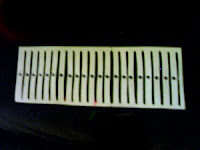 Warping and weaving with this little gadget is a whole other post. However, with a few YouTube videos and my own cussing and fighting with it, I managed to muddle my way through a few inches without any weaving training. 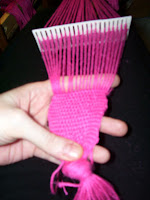 This was done with some leftover Knitpicks cotton/something yarn. The shrinky heddle was definitely hard on the warp threads if you used it for beating down the woven weft threads... so I switched to using my finger instead. There would probably be less wear on a wool or synthetic blend. Also,

I had intended to show this item's construction on a video, but it took way longer than my time limit just to cut out the parts. Even with editing, it was a long, long vid. And then to top it off, about ten minutes after I snapped the progress picture above, I tried to use it to beat down the weft thread, and broke it at a weak point where I tore the plastic film before shrinking.

So the end result of this experiment? If you've got a pack of shrinky film, and want to try weaving to see if you like it, this is a good way to get started. As for me, I'm ordering my loom later today... but no stand. That $110 can be saved till next payday.
Posted by Diela at 6:36 AM

Support me on Patreon! Pledge 1$ a month, or per piece, and cancel any time! You can support the arts, and still maintain your budget by setting limits... check it out!